Two weeks ago, I hosted a pincushion making workshop for Toowoomba Brown Owls. Everyone was successful in creating their own pincushion;
I still have a lot of left over materials for the kits, and have made extra ones up. 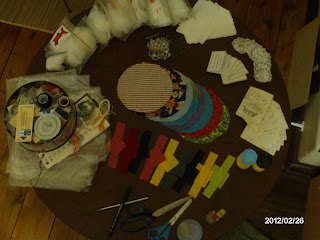 
The stickers were hand-drawn, and each one is a little different. I drew/compiled the other two booklets aswell, and will be selling these kits at the Smells Like Zines distro in Toowoomba. I can also be contacted via this page and this page if you're interested in purchasing one. 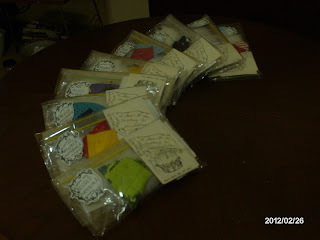 These kits are made from 100% reused or recycled materials, and I will be donating all of the profits to charity.
Posted by NeedlesHooksPins at 01:51 No comments:

Finding out what else I can do.

Unofficially, I have set myself a challenge of getting out of my comfort zone this year. With uni behind me (for now) I am willing to set myself a lot more goals and due dates in relation to my art. So, as I have probably mentioned in a previous post, two new things I am trying, zines and stickers - are progressing. There's no pressure but my own; but a lot of influence from people I am close to getting out and doing it all, having it all, being part of it all. (Or so it seems).


So far, I have been able to do this around preparations for theGRID. The completion date for the building has again been pushed back another fortnight, and I have been fortunate to be alotted more wriggle room incrementally over the last few months. More time for experiments in paper! With one exception. It's the last day of summer, and I might hold off on making paper 'til the end of the cold season.

Posted by NeedlesHooksPins at 20:13 No comments:

So, I think in general, 'street art' as a concept is something that I'm becoming more interested in, and thanks to the internet, can research at my own pace, while networking with a vast array of artists seem to be freer in the production and distribution of their works than I am currently.

There have been several aspects which I think broadly fall into this umbrella category, which I would like to share with you. They are something I am branching out into attempting to make, watching other people do or even just trying to get my head around.

Stickers:
This whole concept is just so strange and new to me. You draw pictures on some stickers. Then, you can find like-minded people online and trade your stickers for their stickers, and they will put yours around their city and vice versa, and be carriers for each others' art. At least, this is the theory. I so far have not found the heart to just leave one callously in the streets (what if they get rained on or ripped down? That is somebody's artwork out there!). Clearly, I have not quite gotten the point.

This sticker distribution appears to run in conjunction with being an artist and creating gallery works and running workshops or whatever else you do. You can also get free stickers for trade as a first timer here (and I'll be letting you know how that goes!).

I have pretty much only become interested in this due to artists such as Barek Art and some other FB contacts, it is a very 'six degrees of seperation' thing. You can find an account of all the many interesting things he (?) does here.

Zines:
I am interested in zines now because of this. A very lovely lady that has slowly introduced me to the strangeness and typos of independant publishing since opening her shop in 2011.

Yarnbombing:
Is taking me a while to get my head around, for the same reasons as stickers as a medium for art (what if they are damaged or soiled?!). Also, the sheer number of people that mention it to me is a huge turnoff, especially when the conversation goes a little something like this;

'What are you knitting?'

'...    Uh, it's crochet. It's kind of hard to explain'.
'My grandma knits. ShetriedtoteachmeitbutIjustcouldn'tgetthehangofitohwell...'
'Have you heard of yarnbombing?'
*nodding* 'Yeah, I don't really get it though. I think tha-'
'I saw the most amazing piece. It was wrapped around a ___(object)___ at a ___(public transportation facility)__ in __(capital city)__, and it was just so colourful and different!'
'That's interesting...I will have to finish this project off, at least' (laughs nervously, wants you to leave).

'Well, I think you should do something because everyone else is doing it.'

...and that is why I am finding it so hard. This conversation is such a turn-off, and I have had it about two hundred times. But, I am digging through the internet (online dumpster diving) to find the yarnbombing (henceforth known as WOOLbombing, yarn feels weird to say) that does not seem to be utterly meaningless and a total waste of time.

Bear with me! I am coming around. Here's some things that helped:


I know as I am writing this, that I have been pretty behind to become aware of things, perhaps you could even say ...slow to jump on some wagons? I have just been so wrapped up in a world of high-art-uni-focused-educational-journals-theoretical-literature-study for the last few years that I have not been able to devote a lot of time to researching these facets of visual expression. And frankly, before now, I have never been interested. Better late than never though, right?
Posted by NeedlesHooksPins at 01:01 No comments:

February - what I have so far (crochet)

While I have spent the last year dabbling in different techniques to increase my range and repertoire, crochet has the #1 place in my heart, and I am (attempting to) pull out all the stops in regards to this next work and what I will be crocheting for it. Fortunately, construction of theGRID space continues on, allowing a bit of a run-up to the work.
Some of what I have so far:
It's not much, yet, but combined with the rugging and felting...I think I just need to keep going!
Wish me luck.
Posted by NeedlesHooksPins at 21:48 No comments:

Email ThisBlogThis!Share to TwitterShare to FacebookShare to Pinterest
Labels: Crochet, Works in progress

Put an arachnid on it.

Sometimes things are very beautiful but they are also very... not boring (never boring!), but less interesting than they could be. This post was originally titled Put a skull on it as I had initally planned to hop on board the candyskull train to Kitsch Town, but I couldn't find any pictures of skulls that grabbed my attention. That's on the backburner currently.

Anyway, this image of ticks did. And so, I have begun to use it in a small amount of embroidery, namely, this purse. A Pimp my Wallet, except the wallet won't cost thousands of dollars (that I obviously couldn't afford in the first place) for upkeep.

I am still tossing up on whether or not to continue the tick pattern around to the other side of the wallet, and a final number of ticks. Also, I now need to find something to do some bedbugs on. I can hear the ghosts of puns past; "OOOOooooOOOoooo say something about a mean bedbug problem in the title of it wOOOOoooOOO...."
And I'll consider it.
Posted by NeedlesHooksPins at 23:49 No comments:

This is the last installment of pre-planning photos. It's exhaustive, but I wanted to cover all the angles.


Posted by NeedlesHooksPins at 03:50 No comments:

Email ThisBlogThis!Share to TwitterShare to FacebookShare to Pinterest
Labels: theGRID, Works in progress

Welcome to the second installment. There's a lot of different angles to be covered, so stay close.

Posted by NeedlesHooksPins at 18:36 No comments:

NeedlesHooksPins
I am an artist who is currently living and exhibiting within Toowoomba and the greater Granite Belt district. My work engages the craft involved in handmaking within a contemporary art context. I am drawn to the physicality of repetitive textile processes, and this is transcribed though the tactile quality of my forms. In particular, processes such as crochet, sewing and rug making serve as a proxy for growth within my personal environment. Many of my works imitate situations in nature, and they form organically as I create each individual piece, each addition both a continuation and re-enforcement of its predecessors. I enjoy using recycled materials for many of my works. Using crochet and other textile techniques to do this is an important part of my work as it celebrates a tradition of craft; which has historically been relegated to a less important form of visual expression.